We provide a wide variety of optical equipment for federal and local government, fortune 500 as well as small and medium sized businesses including components for optical transport, metro ethernet and carrier ethernet access and out-of-band networking.

It’s more than a phone system. It’s a better way to communicate. 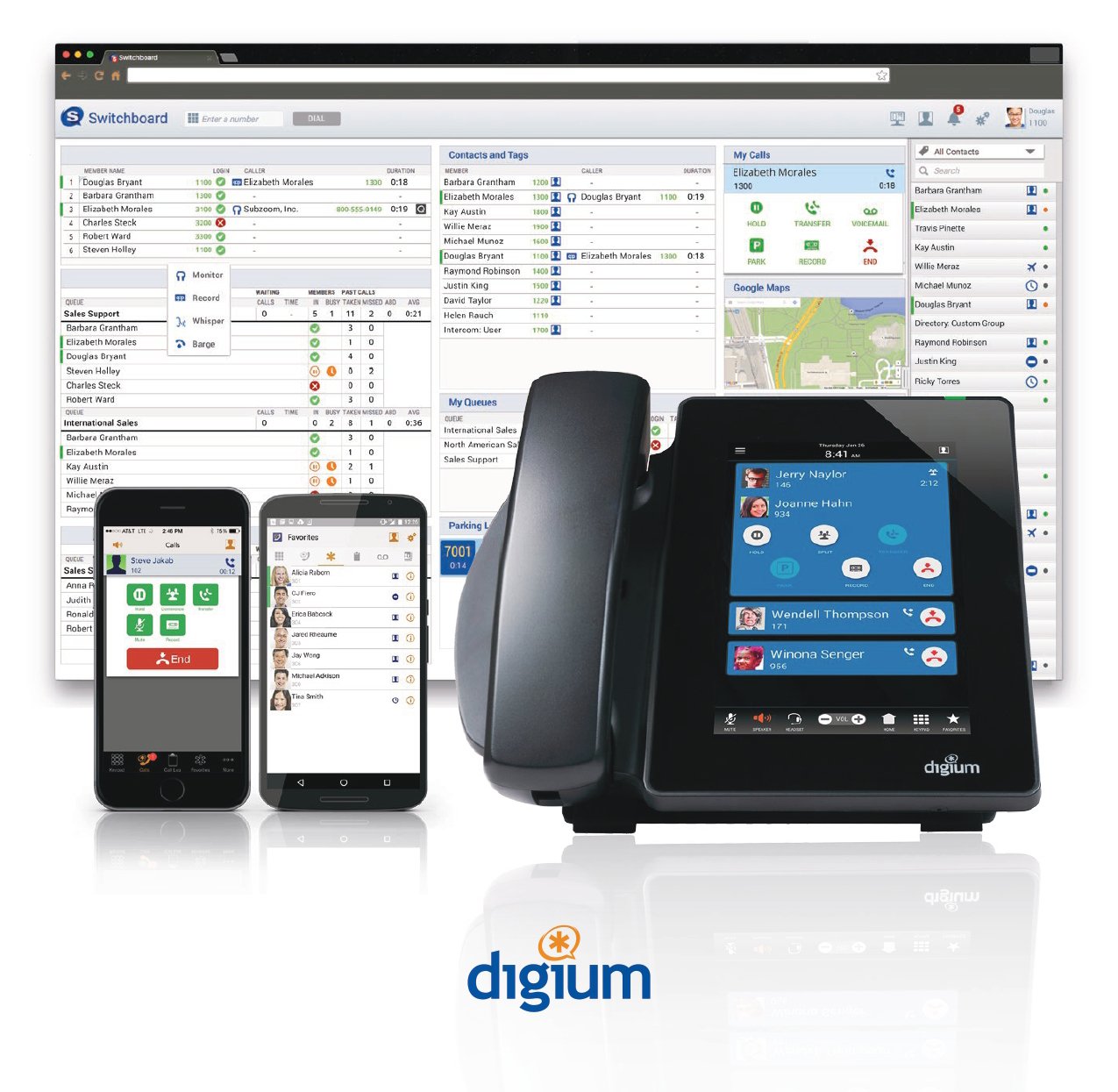 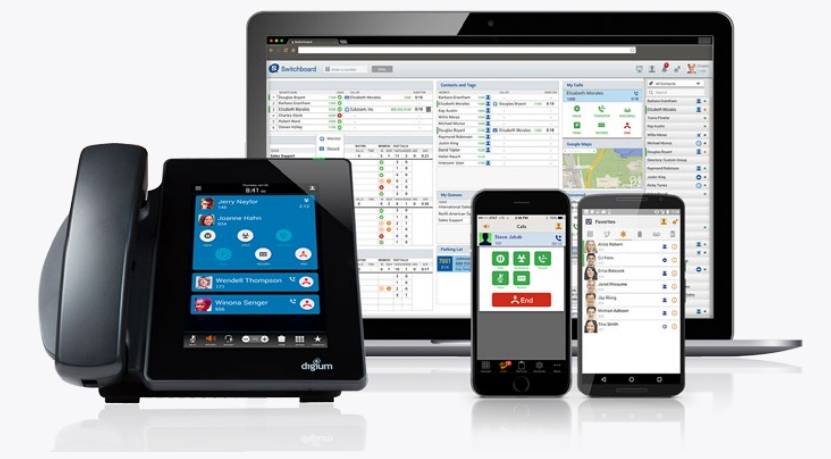 Digium offers VoIP solutions that provide a competitive edge for small, medium, and large businesses. Digium’s product lines include Asterisk custom communications, Switchvox® Unified Communications (UC), SIP Trunking* services, a line of VoIP gateways designed specifically for use with Switchvox and Asterisk®, and a family of HD IP phones that deliver enterprise-class features at a price businesses can afford.

*Switchvox Cloud and SIP Trunking are avalilable only in the US lower 48 states.

Digium is the creator, primary developer and sponsor of Asterisk, the world’s most widely used open source communications software. Asterisk turns an ordinary computer into a feature-rich voice communications server.

Switchvox is the award-winning US solution built on the power o fAsterisk with thousands of installations worldwide. With Switchvox, you can deploy your communications system according to yor business needs – on a dedicatec

appliance, in a virtual enviroment, or in the cloud.

Switchvox is the Best Communications System for Your Business

The combination of Switchvox and Digium phones provides a complete Unified Communications (UC) solution for small and mid-sized businesses by integrating all of your office communications, including phone, fax, chat and web conferencing, to give you a customized communications experience. It allows you to access call queues, presence and the applications you need right at your fingertips.

Count on Switchvox to help you easily transition from simple telephony to a feature-rich UC solution. Available in multiple deployment options, Switchvox allows you to collaborate on your terms and to improve your productivity no matter where you are – on a mobile phone or at the office. Talk about flexibility!

Switchvox is the Smarter Choice for Your Next Phone System

Deploy How You Want

Switchvox can be deployed in multiple ways, each with the same all-inclusive feature set. Simply choose the deployment method that is right for your organization to get the most out of your communications system. If you are looking for a hands-off phone system that doesn’t require an IT staff and fits into an OpEx spending model, choose Switchvox Cloud. If you prefer complete control, a larger user capacity and a CapEx spending model, Switchvox on a dedicated server is the way to go. If you are already running your business in a virtual environment, Switchvox software will easily fit into your existing systems.

Unlike other proprietary systems, Switchvox gives you more value for your purchase. With all features included, multiple deployment options, less add-on fees, and a simplified pricing model, Switchvox is the best value in UC.

An intuitive point-and-click interface allows you to manage every aspect of Switchvox from anywhere you have Internet access. Empower your employees to manage their own status and voicemail boxes. You can easily view the “who, what, when, and where” of your business calls using Switchvox’s extensive features, which can be accessed directly from your desk phone or Switchboard.

Many Products in One

Switchvox is more than just a business phone system. When combined with Digium phones, it is a complete Unified Communications solution. The system combines the power of many features into one, such as a conference bridge, chat/instant messaging server and IVR. Consolidate some of your office activities and save more money in the process. 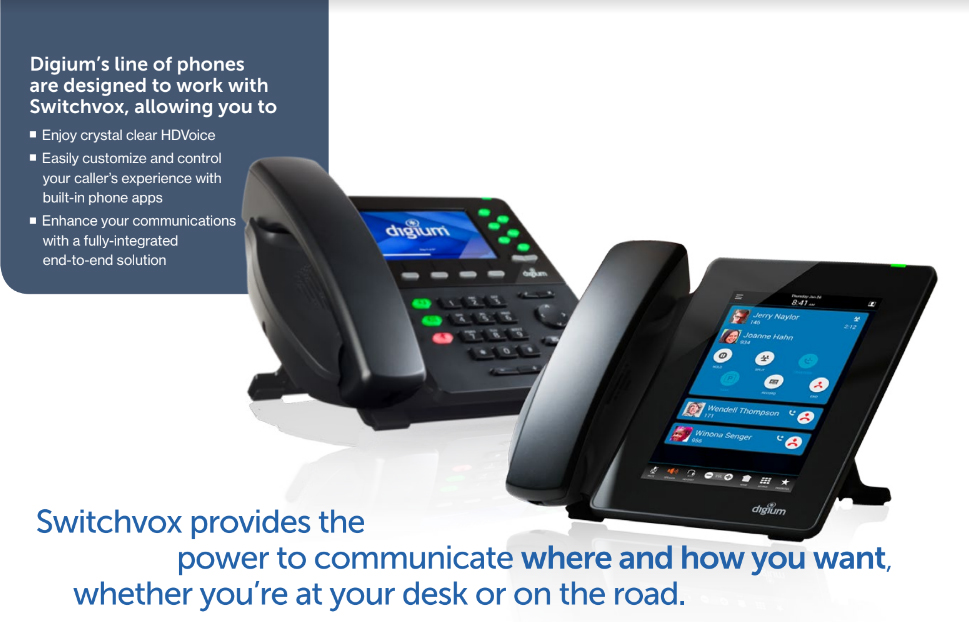 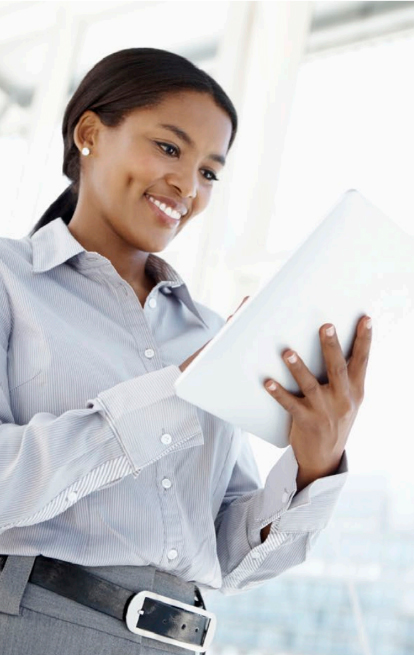 Let Switchvox work for you by easily integrating other business applications with your phone calls. Access real data, trigger events and enable business processes with incoming calls. Automatically access your caller’s record with built-in support for Salesforce.com. Administrators and users are able to easily access real-time call queue information and detailed reports within Switchvox. Monitor calls whether you’re remote or in the office. Discover everything you need to know about your caller before you pick up the phone.

Today’s conversations involve more than just your voice. With Switchvox, you can click on an extension to initiate high-definition calls with Digium phones. Switchvox systems also support high-quality video calling with IP video phones so you feel more connected with remote callers and won’t have to miss a facial expression. Think of how much you can save if you don’t have to travel by airplane every time you want to get business done.

Switchvox lets you define where and when you communicate. Imagine being able to receive your office phone calls on any phone. Whether you are at your desk, on your cell phone, or using the hotel phone, others in your office will see you are on the phone – your extension and “presence” stay with you. With Fixed Mobile Convergence, easily transfer calls from any phone back to your Digium desk phone or another caller without interrupting the call, allowing you to take your office on the road! 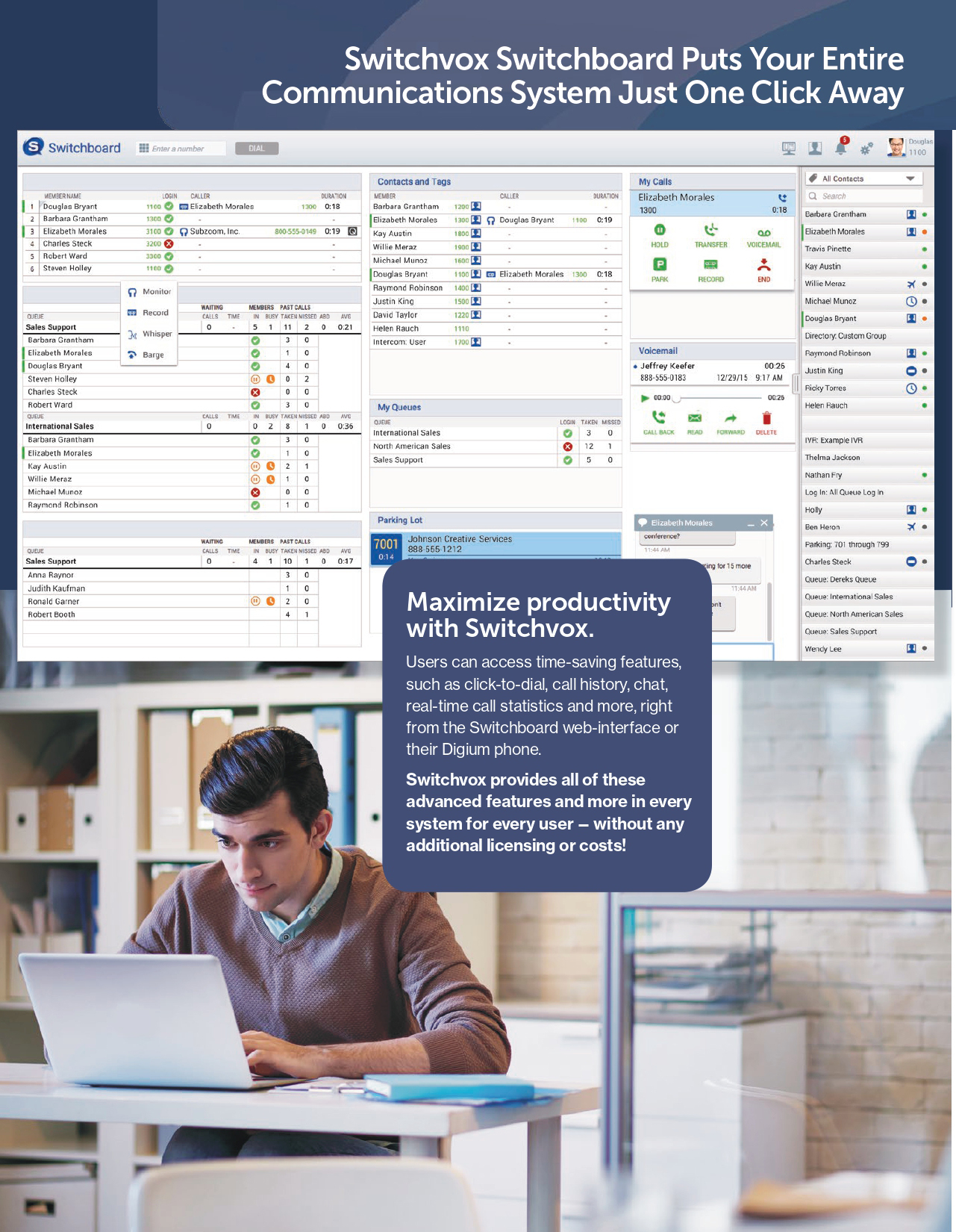 See who is in the office, who is on a call, and who is away from their desk. Call rules update automatically based on an employee’s presence.

Great for training and auditing calls. Managers can easily monitor, whisper, barge and record calls from the Switchboard. You can also record calls directly from your Digium phone.

(Fixed Mobile Convergence)Access all the power of your desk phone anywhere you go with the Switchvox Softphone for iPhone® and Android®. Receive and transfer calls, create conferences, change your status, and more—all from your smartphone.

With voicemail delivered to your inbox or mobile device, you can stay in communication wherever you are.

See details about all calls in your system. Custom, statistical reports can be scheduled and emailed to you automatically.

A built-in conference bridge allows all of your employees to manage their own conference rooms on-demand.

Collaborating over long distances has never been easier or less expensive since video phones are compatible with Switchvox.

Switchvox’s Switchboard has click-to-call, transfer and many other features that make it easier than ever to communicate intuitively.

Not just for the call center, Switchvox and Digium phones bring powerful call queuing functionality to even the smallest business that needs to efficiently handle inbound calls.

Easily integrate Switchvox with any web application to give your employees everything they might need for a call—before they answer it!

Switchvox is integrated with Salesforce.com. Your sales and service organization will have customer information right at their fingertips when they receive a phone call. What a productivity boost!

With Switchvox, on-premise fax is integrated. One number works for faxes and calls. Faxes are delivered directly to your inbox! (Cloud options also available)

Switchvox’s Extend API makes it easy for a web application developer to integrate Switchvox with any web tool. The Digium Phone API allows custom apps to run natively right on the phone.

The extensive built-in IVR allows you to provide information to the caller, collect information about the customer need, and transfer the caller to the appropriate person or department.

By mixing VoIP with traditional calls, your business can optimize communications and save money without sacrificing features.

Choose the Switchvox Solution that’s Right for You

With Switchvox, you can ensure your business communications investment is protected. Because all deployment methods incorporate the same software, you can easily migrate from a Switchvox Cloud installation to a Switchvox premise-based solution should you decide the hosted solution no longer fits your particular business needs. Most importantly, when moving from Digium’s cloud-based solution, you maintain all of your settings and phones, making it a truly seamless transition for your

employees. With Switchvox, you have the flexibility to grow into the phone system you need in the future.

Switchvox can also be deployed in a virtual environment using the power, scalability and disaster recovery tools available with VMware. Virtualization eliminates the need for a dedicated appliance and provides small and medium-sized businesses with a phone system that is able to meet the needs of an enterprise at a fraction of the cost.

The Platinum subscription plan from Digium gives Switchvox On-Premise customers access to all the latest software releases as well as 24/7 US-based support. 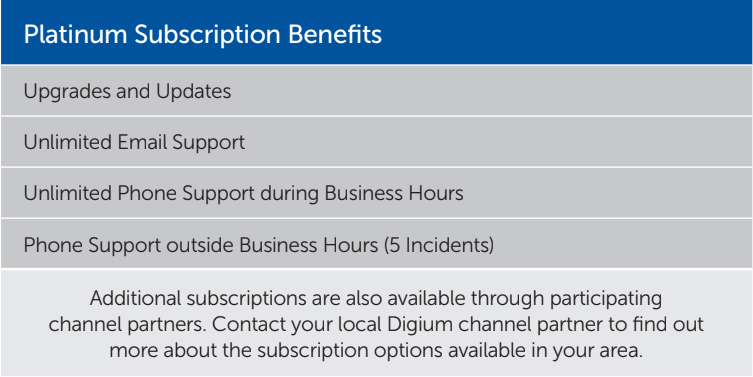 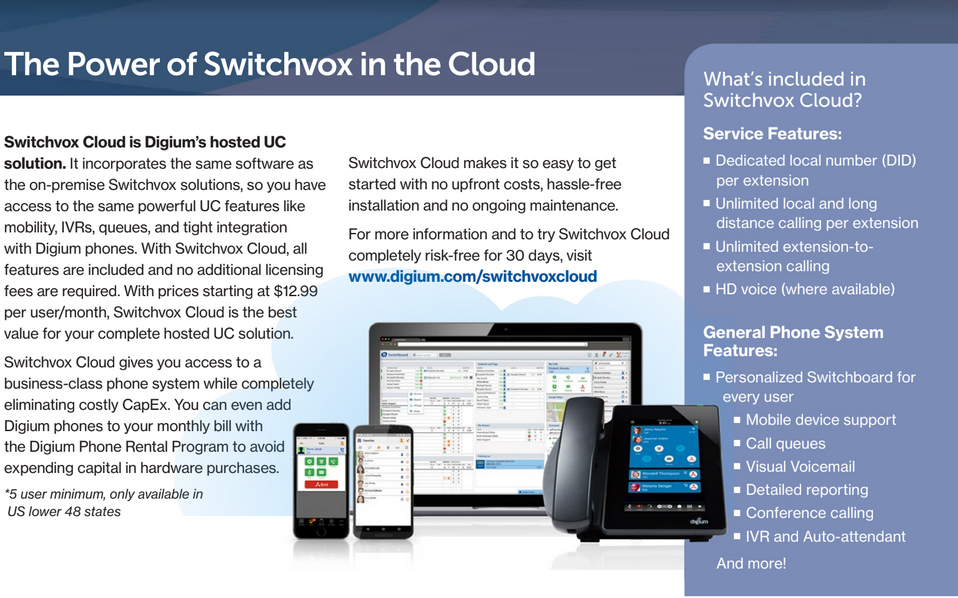 Extend your Switchvox system to your desktop phone with built-in apps or build your own apps with an open API. You can customize your complete communications experience whether you’re in the office or on the road.

With all features included, Digium is recognized as the Best Value in UC Phone Systems.

“SMBs are expected to continue to retain a cautious approach to spending, and their UC decisions will be shaped not only by business process and communications improvements, but also by hard cost factors (like costsavings). This means some SMBs will take a more evolutionary approach to UC as they leverage existing investments in phones or communications infrastructure instead of migrating to UC suites in a single leap.”

Want to find out more about Switchvox?

Digium®, Inc. provides Asterisk® software, telephony hardware, and Switchvox® business phone systems that deliver enterprise-class Unified Communications at an affordable price. Digium is the creator, primary developer and sponsor of the Asterisk project; the world’s most widely used open source communications software. Asterisk turns an ordinary computer into a feature-rich communications server. With a community of more than 80,000 developers and users worldwide, Asterisk has been used to create VoIP communication solutions in more than 170 countries. Since 1999, Digium has empowered developers to create innovative communications solutions based on open standards and open source software, providing an alternative to proprietary phone system vendors. Digium’s business communications products are sold through a worldwide network of reseller partners.

Recognized as the best in the industry

Read the latest case studies for Anti-Virus solutions we’ve provided for our clients.